Over a Century of Cincinnati Auto Shows 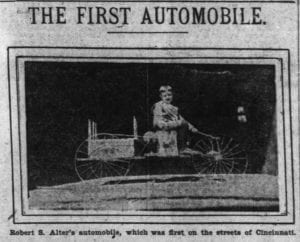 The Cincinnati Auto Expo is the highlight of the year at GCADA, and has been a great opportunity for manufacturers to exhibit their latest offerings to the region’s prospective buyers and car enthusiasts. It might surprise you to find out that the history of Cincinnati’s Expo can be traced back almost as far as automobiles themselves!

In 1898 the Tristate Vehicle and Implement Dealers Association (GCADA’s forerunner) held it’s first convention and exhibit at the Cincinnati Music Hall. At first, there was “no effort made to have the general public become interested in these exhibits,” according to current reporting in the Cincinnati Enquirer. At this point, automobiles were too expensive for most, but as manufacturing increased so did public demand and curiosity, and by 1910 Cincinnati’s show was considered first rate: 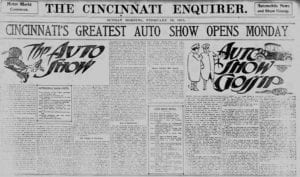 “Year’s ago Cincinnati attended the shows in New York, Chicago, Detroit and other cities for the purpose of seeing what her neighbors had to show in the motor line. Now it is different. They stay home and see what Cincinnati herself has accomplished during the year.” (Enquirer, 2/10/1910)

The show become a point of civic pride and the Cincinnati Automobile Dealers worked year-round to top their displays from the previous year: “Various civic leaders and others interested in the promotion of Cincinnati as a business center have expressed appreciation of the forward step taken by the Automobile Dealer’s Association in putting on a show of which the whole city can be proud.” (Enquirer, 1/28/1923)

At this year’s Auto Expo, we hope to continue this tradition of bringing Cincinnati a show it can be proud of, and hope to improve on every aspect of the show. We appreciate everyone who has helped keep this tradition, now over a century old, going, and hope you’ll continue to celebrate with us at the 2017 Cincinnati Auto Expo.